Librarian on a Distant Shore 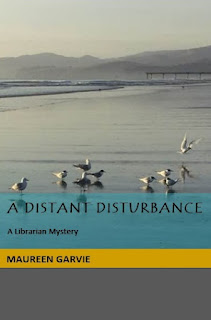 Ellen Delgato never expected her encounter with historian Martin Butler to continue after the Colonial Studies conference where they met, so when he invites her to visit him in his native New Zealand, she is surprised, and wary. Think of it as a time-out, he suggests, an escape from the bone-chilling Canadian winter and a chance to reevaluate what he views as her dead-end library job.
Ellen is blown away by the small, perfect country at the end of the earth. It feels exotic, yet civilized and safe, despite a brutal murder in Martin’s neighbourhood shortly before she arrives. She explores the South Island’s soaring mountains and pristine beaches and makes some new friends. When one of them enlists her aid in investigating the shady past of a powerful local businessman, Ellen happily contributes her research skills – ignoring Martin’s advice to steer clear. Her discoveries coincide with a rash of accidents and break-ins, and she realizes that in this small place, little goes unnoticed. It’s time to go home, but distance doesn’t resolve the troubles she has helped stir up. Passions, she discovers, cross hemispheres with ease.